KnowWonder was an American videogame develop, known to us for its games based on the first three H. Potter movies. The company is long gone, its official website has been closed, and the company itself has been bought out by Amaze Entertainment, and then by Foundation 9.

Founded in 1996 in Kirkland, Washington, the company has made games for a variety of platforms:

The company had many different publishing partners:

One of the main principals of the company was complete privacy, which makes the fans of the H. Potter games still craving for beta levels shown at E3, unfinished levels, and development kits. KnowWonder really did a good job keeping their privacy, but not all of us are happy with that ;-)

It’s hard to disagree with KnowWonder’s statement on their website that they have made high quality games: in more than 10 years, very few serious bugs were found in the first games. And these few bugs do still allow you to play thought the game, unlike the many problems of modern games.

The games that fit the theme of our website: 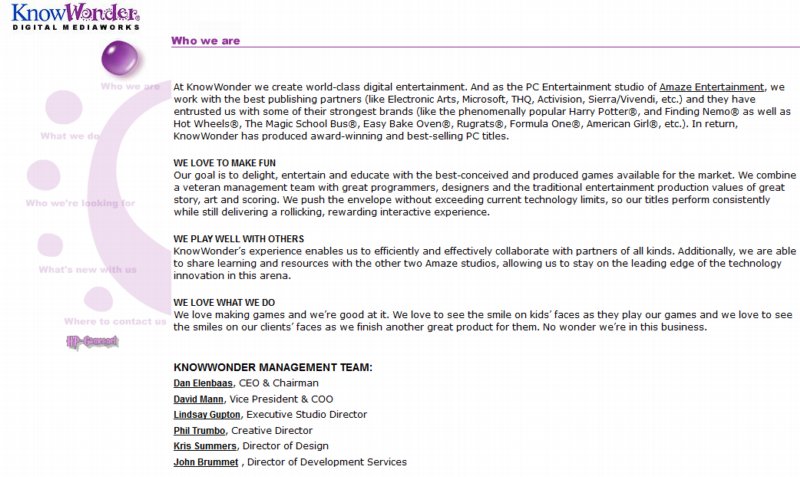 KnowWonder’s site was hosted in the years 2000-2005, and consisted of various simple pages with an animated logo created in Adobe Flash (back then Macromedia Flash), switching between pages also made in Flash technology (pressing the menu buttons played different sound effects). The site’s logo was right in the page switching menu.

In the spring of 2005 the website had a significant update. All the animations were removed, the amount of pages has increased. The logo was changed as well. Now it became a white text on a black background, featuring the parental company – Amaze Entertainment.

You can often find this logo (usually animated) in the games of that era:

The website became unavailable somewhere in 2009. As of writing this article, the website shows a strange logo, having nothing to do with the company or its products.

1. If you want to display a comment only to employees of the site - add the word "top_secret" ;-)
2. Our emoticons (opens in a new tab)
3. To add a picture in a comment, use the services of photo hosting, for example https://postimage.org/, suitable HTML-code to insert (radikal.ru and hung with such advertisements with a rating higher than 12+ options should be avoided).
To place file, you can use a file hosting, for example, Yandex. Drive.
If you have chosen not the best option, after viewing your comment links are deleted, but the data will still be accepted for consideration.