Electronic Arts is an American corporation that creates and distributes video games. It was founded on May 28, 1982.

The lovers of the world of HP are known as the creator and temporary distributor of computer games that were released to the release of the same films. The exception was: Quidditch simulator “HP: Quidditch World Cup” and “HP: Mastering Magic” (for mobile devices).

The site has changed its structure and domain names several times.

hpgames.ea.com. Appeared tentatively in 2002, disappeared in the autumn of 2006. Since 2009, the domain name leads to a website that has nothing to do with H. Potter. The subdomain was completely dedicated to the game “HP and the Philosopher’s Stone”. The site was a flash-application and sometimes made a terrible squeak. 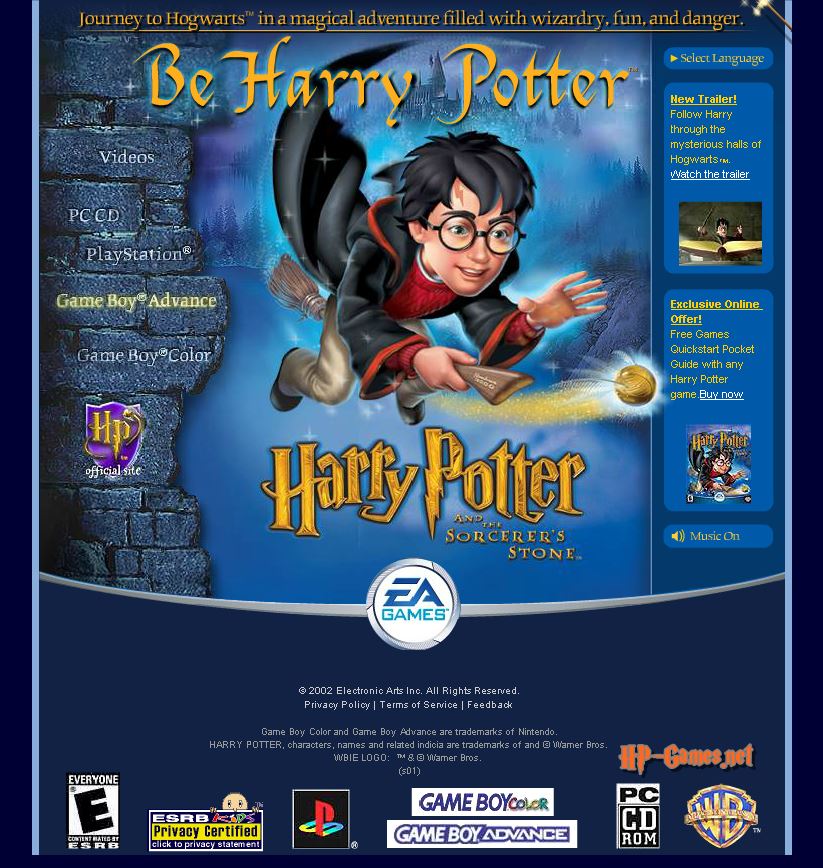 harrypotter.ea.com. This domain name was retained for the site until its closure. Below you can see what the updated version of the site of the Philosopher’s Stone looked like, using a new domain name. 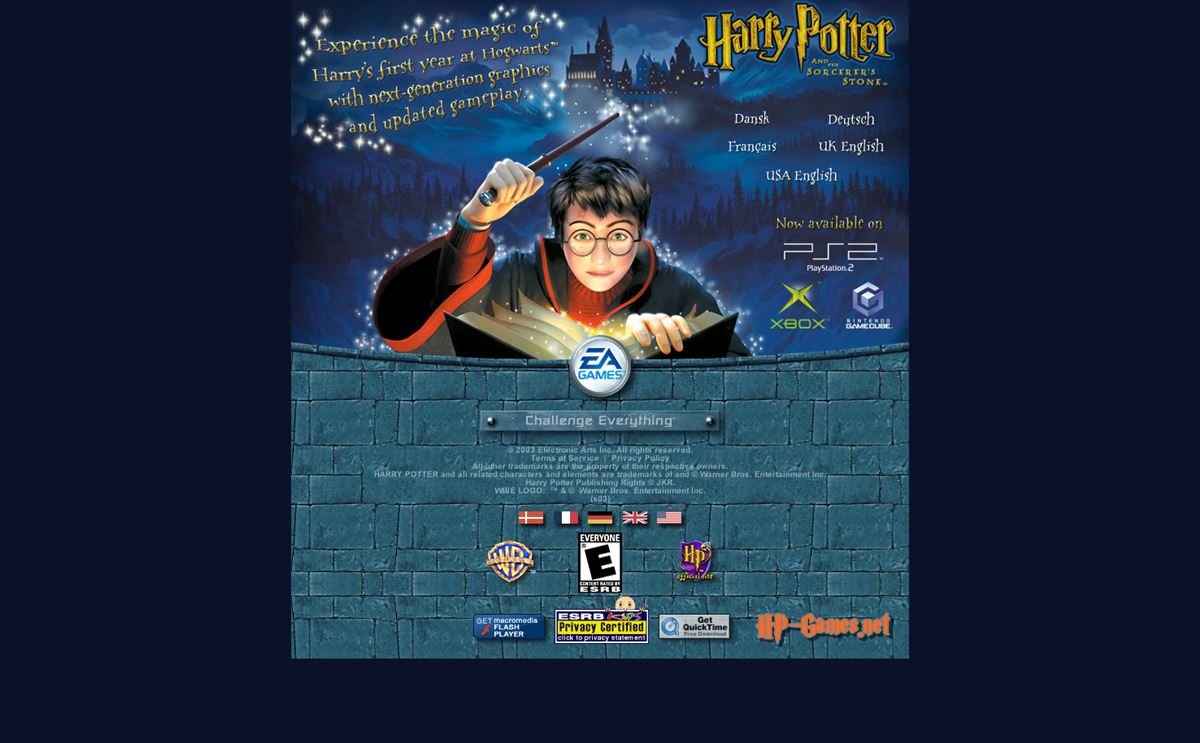 Beginning with the “Chamber of Secrets”, it contained graphic links to game sub-sites. So in 2002 there was a stylized menu of language selection for the site of the Secret Chamber. Until the summer of 2003.

Approximately in November-December of the same year, after the game was released, another version of the game site appeared on the server: this time it was more complete – short descriptions of the teams were added, an opportunity to download thematic pictures. The new folder was named quidditch_game. 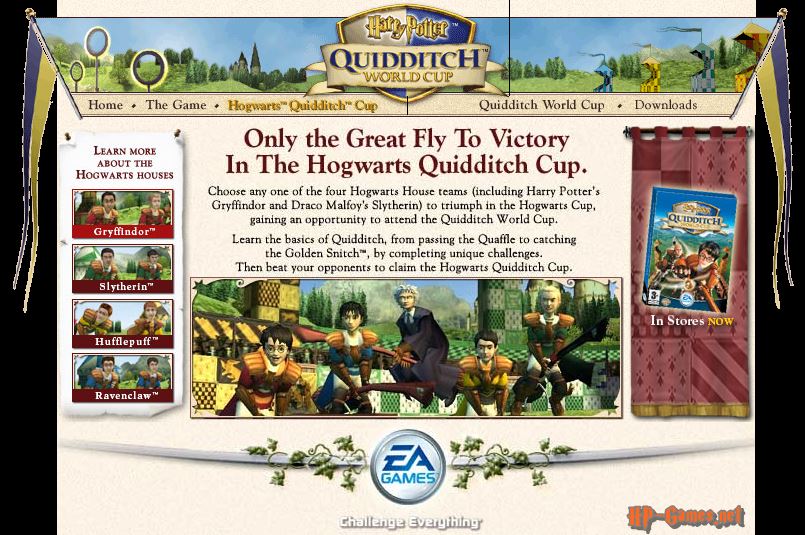 In the spring of 2004 the site is again being transformed – it is preparing for the release of the “Prisoner of Azkaban”. At the same time, all links to already released games are also available. But here the link of the site “Philosopher’s Stone” is already on a new subsite, located at harrypotter.ea.com/hpgames2. The emphasis is on the recently released updated version of the game, available only on modern set-top boxes to the TV. A folder for the site of the “Prisoner of Azkaban” was created on the server: hppoa.

In May 2005 the site again changed – it began to run the salamander and he reported on the upcoming game “Goblet of Fire”. It was suggested to see 3 screenshots. In this case, the links to the sites-folders of previous games remained, but moved to the bottom of the page. 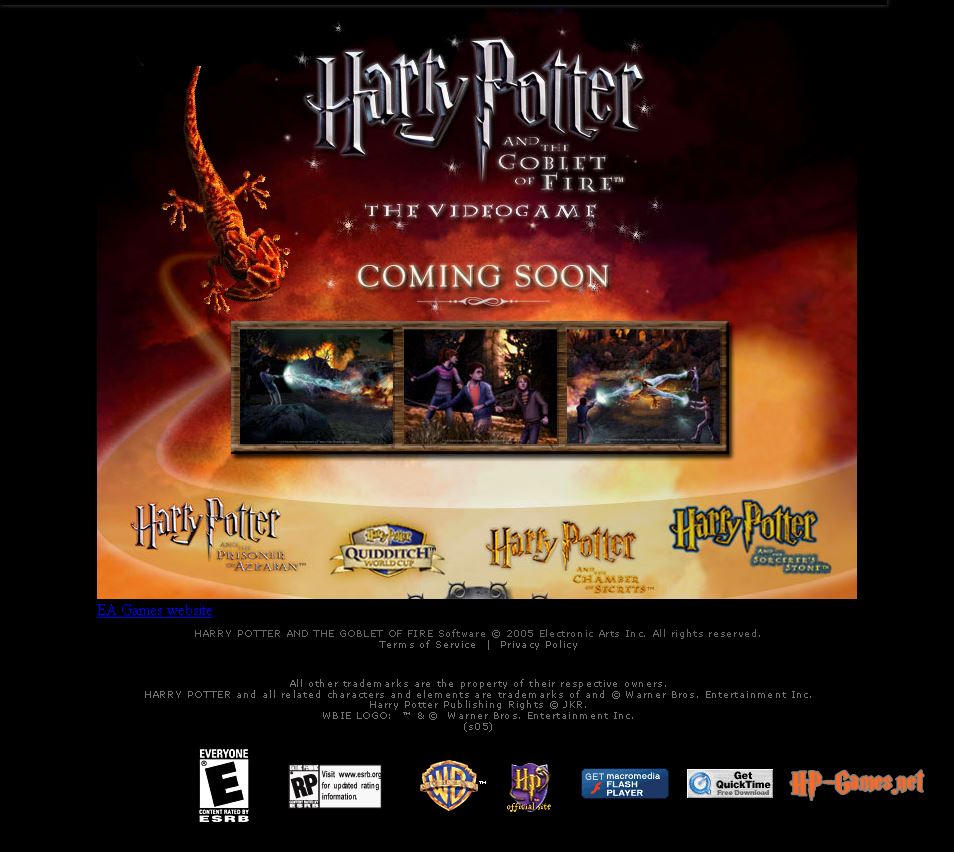 In October 2005 the site changes: links to previous games are now located on the left and right, and in the center is a link image of the album cover that leads to the opened game site http: //harrypotter.ea. com / hpgof / Yes, a new folder appeared on the server 😉 The site became inaccessible in the autumn of 2007. 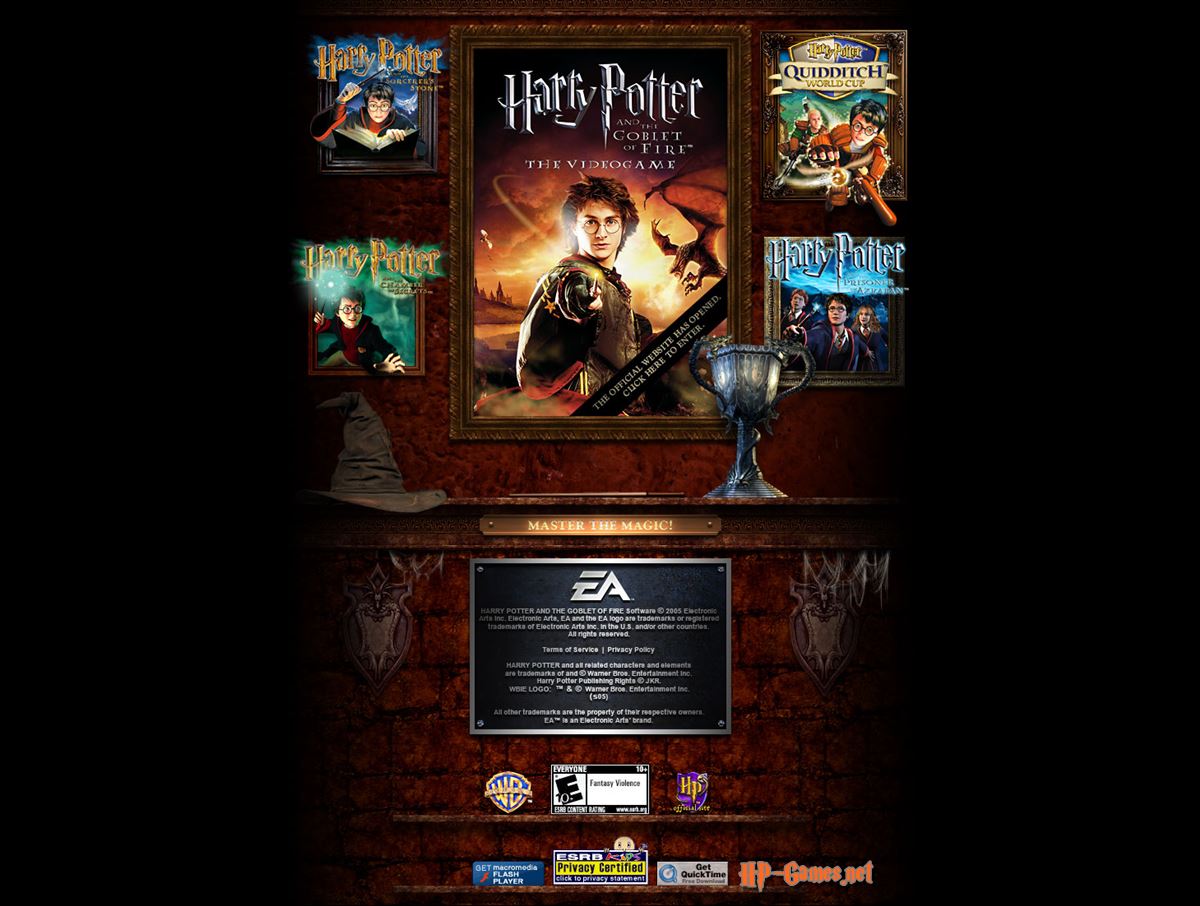 In February 2007, the site again changed: now in the center is the upcoming game “Order of Phoenix”. There was a subsite in the folder op. It was suggested to read the press release and see the screenshots. 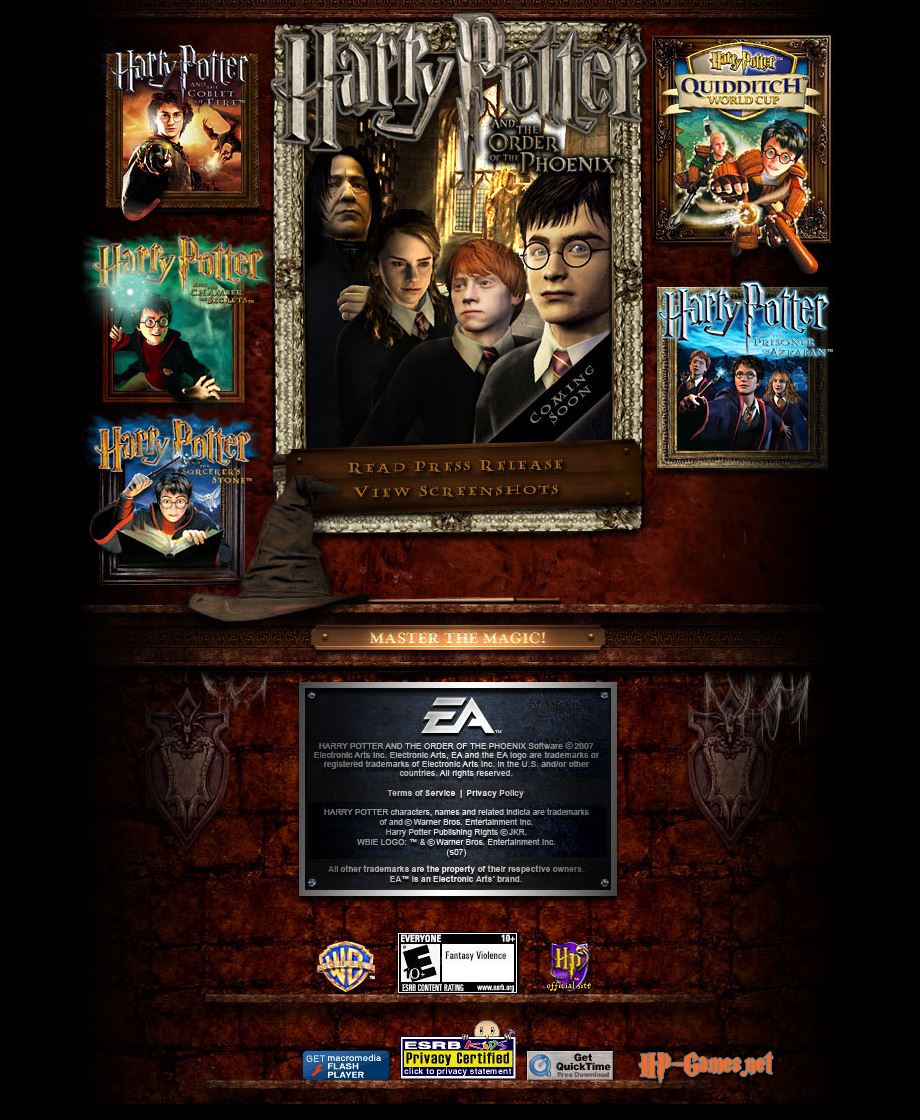 In June 2007 the main page of the site is the language selection menu, where for the first time the item “Russia” appears – the Russian version of the site has appeared. The site is completely translated into Java Server Page technology, so it did not stay in the cache of search engines. Like his followers. Links to previous games are no more. Now the site files are located directly in the root directory. It became the site of one game. Soon the servers of EA will lose the sites of previous games. 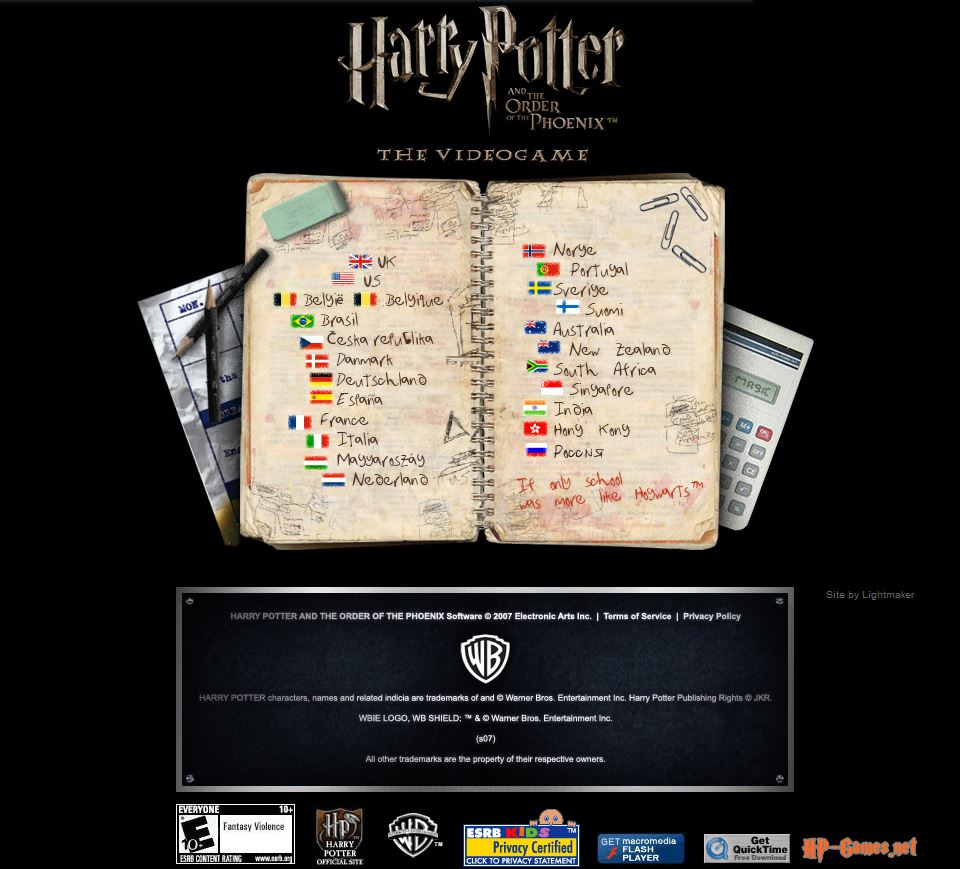 In August 2008, the site had another page with a list of countries: the site switched to the upcoming “Half-Blood Prince” game, which was being prepared for release, but only a year later.

Since June 2, 2010 the site has been redesigned for a new game – “DH. Part 1”, which will be released in November 2010. On the same day, we received a letter with a proposal to cooperate. Below is the top of the site pages.

End of June 2010. The site again appeared subfolders: each language version got its own. The Russian version was located at: harrypotter.ea.com/RU/ . On November 21, we held a contest, the winners of which received license keys for this game – for free download and activation in the EA corporate service.

Fall 2010-Winter 2011. After the release of part 1 of the game, the EA leadership was thinking about whether to do the second part after a huge number of negative feedback from users. As a result, the game is still done.

Closer by the summer of 2011 the site was redone again – now it applied to both parts of the game, although part of the materials on the first part became unavailable. We managed to reconstruct the appearance of most of the English version of the site.

On July 24, 2011, we held a competition, as the prizes were given license keys to this game.

Already from August 2011 in EA, the destruction of everything that was connected with H. Potter was in full swing. The site at the same time stopped updating and in this form stood until the end of 2012.

January 1, 2013. The end of the contract between Warner Bros and Electronic Arts: all those who entered the game site are redirected to ea.com. Service Origin no longer finds games about H. Potter. EA is no longer associated with Mister Potter.

Since 2014, the site leads to the login page on a third-party site that has nothing to do with H. Potter.

This organization is also famous for the fact that after a while it forgets about its games, stopping any support: from the possibility to buy a legal copy of the game before receiving any information about it.

From June 2010 to August 2011 our website helped EA spread information about the last two games about H. Potter. As a result, our visitors received the latest news about these games, and after their release in November 2010 and July 2011, several license keys were played out with the help of our contests: first (in Russian) and second (in Russian). “Friendship” disappeared after the fall of 2011, Electronic Arts disbanded their studio, developing games about H. Potter and we have with them disappeared common interests.

Nostalgic and working with archives: АlехeyMS

1. If you want to display a comment only to employees of the site - add the word "top_secret" ;-)
2. To add a picture in a comment, use the services of photo hosting (suitable HTML-code to insert).
To place file, you can use a file hosting, for example, Yandex. Drive.
???
We are still experimenting with languages
Announcement (off topic)
The site administration is looking for a small (preferably educational) organization that needs technical support for websites on Wordpress (BackEnd, remotely) for long-term cooperation. If you work for such an organization, please let us know.
Our software ;-)